At the zenith of its fame, the Orient Express ran three distinct routes across continental Europe, each one linking the western cities of Paris and London with Athens and Istanbul.

For the first three decades or so of its existence, however, there was only one Orient Express line. Billed as the Express D'Orient, it ran a far shorter route between Paris, France, and Giurgiu, Romania.

From Giurgiu, travelers took a ferry over the Danube to the Bulgarian city of Ruse. After a 7-hour train ride across rural Bulgaria, passengers arrived at the port city of Varna, where they boarded an Austrian Loyd steamer for the 14-hour voyage to Constantinople (modern Istanbul).

THETRAVEL VIDEO OF THE DAY

In 1889, the eastern portion of the railway was finished, and the train finally ran direct to Constantinople from Paris via Bucharest. It was rechristened the Orient Express in 1891.

Upon the later inauguration of its Simplon and Arlberg sister lines, the original route became known as the 'Classic' line. It continued to operate for much of the twentieth century, and its legendary path can still be re-created today.

Related: A History Of The Orient Express

How Long Does It Take?

In 2022, the full London-to-Istanbul route requires five days to complete. Alternately, travelers can reach Munich from London via Amsterdam (rather than Paris) by adding an extra day to their journey. 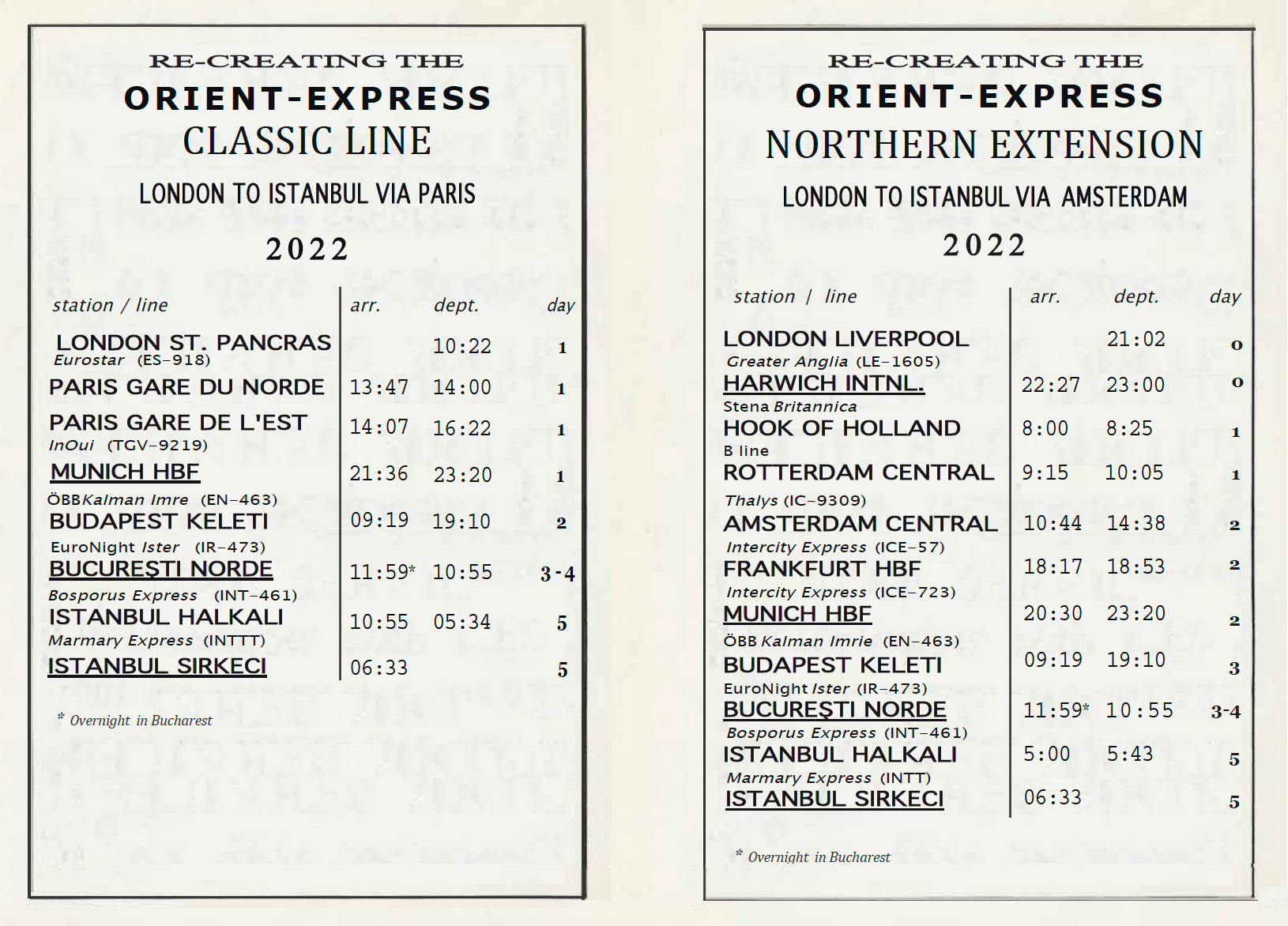 How Much Does It Cost?

One of the most significant advantages of re-creating the classic route of the Orient Express independently is dodging the astronomical price of tickets on the only direct train between Paris and Istanbul—which runs the full route just once a year, charges tens of thousands of dollars per passenger, and no longer runs to London.

London to Istanbul via Paris (one-way)

London to Istanbul via Amsterdam (one-way)

Day 1: London, Paris, And Munich (Via The Channel Tunnel)

Morning: London to Paris on the Eurostar high-speed train

Modern travelers will begin in London's St. Pancras International Station, opposite King's Cross. From here, at 10:22 am on weekdays, take the Eurostar high-speed train to Paris via the English Channel Tunnel.

At the moment, the trusty Eurostar continues to ply its route to Paris, despite the post-Brexit travel chaos currently afflicting the British Isles. Comfortable, scenic, and punctual, with tickets averaging about $199 (or $34 with an interrail pass), the ES-918 arrives at Paris Gare du Norde by 1:47 pm. From Gare du Nord, it is just a seven-minute walk through Paris to Gare de l'Est: a stunning Neoclassical structure on the banks of the River Seine, which once served as the western terminus of the original Orient Express.

Be sure to venture up to the station's roof for cocktails at the excellent Le Perchoir de l'Est, the stylish terrace bar tucked away beneath Gare de l'Est's famous half-rose window.

Afternoon: Paris to Munich on the TGV InOui high-speed train

Departing at 3:55 pm from Gare de l'Est, with tickets selling for about $140 (or $16 with a rail pass), the TGV InOui line to Germany is a cutting-edge, well-maintained duplex complete with cafe-bar and free WiFi.

At 9:36pm, the InOui calls in Munich, a vibrant and strikingly beautiful German city. Stop for dinner (and a pint of local craft beer), or climb the Rathaus Observation Deck for a stunning panorama of the skyline—a mélange of Renaissance, Gothic, Romanesque, and Baroque architectural styles—before returning to Munich HBF in the late evening.

Evening: Munich to Budapest on the Kalman Imre sleeper

Departing at 11:20 pm and hauled by a Railjet locomotive from Austria's national rail service, ÖBB, the Kalman Imre sleeper from Munich to Budapest boasts classic Hungarian sleeper cars and a nostalgic vintage appeal. Travelers can reserve a single bed in a triple sleeper for about $142 (or $39 with an interrail pass).

Alternate Day 1: London, Amsterdam, And Munich (Via The North Sea)

To recreate the Orient Express's northern extension from Amsterdam, forego the Eurostar and instead take the Greater Anglia line's LE-1605 from London Liverpool to Harwich Station at 9:02 pm on Day 0, with second class tickets starting $49 (or free with a rail pass).

Following a 10:30 pm arrival at Harwich International Station, book overnight passage on the Stena line's Britannica ferry to Holland, which departs at 11:00 pm and docks in Hook of Holland Harbor around 8:00 am the next morning (Day 1).

With tickets averaging $55, the Stena line ferries are known for their high-quality facilities, including both casual and upscale dining halls, a rooftop deck, an onboard café, and, for an additional cost, state-of-the-art cabins that offer comfort, privacy, and porthole views. From Hook of Holland, take the B train to Rotterdam Central, where high-speed trains run every 30 minutes to Amsterdam. From Amsterdam, board the high-speed Intercity Express line 57 at 2:38 pm to arrive in Frankfurt at 6:31 pm ($28, or free with an interrail pass).

At Frankfurt, transfer onto the 6:53 pm Intercity Express line 723 ($21, or free with an interrail pass). After a wonderfully scenic journey across Western Germany, the ICE-723 terminates at Munich HBF by 20:30, leaving modern travelers several hours to catch the Kalman Imre and rejoin the traditional route to Turkey.

Morning: arrival in Budapest on the Kalman Imre

The Kalman Imre sleeper continues on its course through rural Austria and Hungary until 9:19 am, when it arrives in Budapest Keleti.

Modern travelers will have several hours free to explore the fascinating city of Budapest on the banks of the fabled Danube River. Cosmopolitan and colorful, the Hungarian capital makes for a captivating afternoon. Stop by the historic Palace of Art or visit the luxurious bathhouses on one of the most worthwhile stop-offs on the Orient Express's classic route.

Evening: Budapest to Bucharest on the Ister sleeper train

Departing Keleti Station at 7:10 pm, EuroNight's Ister is another excellent European night train: air-conditioned, comfortable, and complete with a bar and bistro carriage, this high-speed sleeper traverses rural Hungary before crossing into Romania just after midnight, with tickets for a single bunk in a 6--berth compartment starting at $36 (or $16 with a pass).

Day 3: Transylvania And Bucharest (Via The Carpathian Mountains)

Morning: arrival in Bucharest on the Ister

The next day, Ister follows a spectacular path through the Carpathian Mountains before descending into legendary Transylvania. At 9:54 am, the train calls at Brașov, where travelers can stop off to visit Dracula's Castle.

Due to the conflicting schedules of the sleeper trains to Bucharest and Istanbul, respectively, modern travelers will spend a night in Bucharest, the intriguing capital of Romania.

Nicknamed the "Paris of the East," Bucharest has long been celebrated for its elegance and tranquility. While there, be sure to admire its enormous Parliament building—considered the largest such building in the world—and admire the eclectic architecture of its serene streets.

Morning: Bucharest to Istanbul on the Bosphorous Express sleeper train

After a night in Bucharest, return to Bucuresti Norde for a journey on the Bosphorous Express, an air-conditioned Turkish train offering beds in 4-berth couchettes for about $31 (or $15 with a pass).

Departing at 10:55 am, the train stops after midnight near the Bulgarian-Turkish border, where it meets the Sofia Express from Bulgaria. The Sofia's sleeper carriages are attached to those of the Bosphorous, and the train carries on overnight towards Istanbul as a single unit.

At 6:33am on the fifth and final day in transit, the Bosphorous express calls at its eastern terminus: Halkali Station in the suburbs of Istanbul. From here, Marmary Express intercity trains run to the city center every half hour. Hop on the earliest available Marmary train for a chance to reach central Istanbul in time for a spectacular sunrise.

This Japanese Temple Is The World's Oldest Wooden Building

Architectural Masterpiece: Here's Why You Should Visit The Italian City Of Bergamo

Day Of The Dead: Why It's Celebrated & How

Exploring Vienna: How To Plan A Weekend Trip To Austria's Classic Capital

Explore The Dutch Countryside On These Day Trips From Amsterdam

Studies Show This State Has The Biggest Halloween Vibe

Reno Vs. Las Vegas: Which Is The Better Nevada Vacation?

Which Titanic Museum Is The Best? Let's Compare Them

Budgeting For The Appalachian Trail: How Much Thru-Hiking Will Cost

Upside Down House & More: What To Explore At Pigeon Forge WonderWorks

Rock City Is One Of Kansas' Strangest Geological Attractions

Reading Terminal: A Guide To This Must-Visit Philadelphia Market

Thousand Springs State Park: Why It's A Hidden Idaho Gem & What To Do There

How To Plan Long-Term Travel (With Tips That Actually Help)

What Makes Rosewood Castiglion Del Bosco One Of The World's Best Hotels?